So it appears that the river Thames been selected to host “an in-depth study into the breeding and habits of several species of fresh-water sharks.” I honestly can’t wait. I’m just a bit gutted that the water is so murky, less chance of seeing them.

So what’s it all about? Well, two thousand sharks are to be released into the river including blue sharks, hammerheads, and a few great whites. The experiment is designed to determine whether the sharks could survive in the cold climate of London. The thinking behind it is to keep the tourist industry alive after the Olympics.

The government is said to be spending £1.3 million, but think the return could be 10 times that over the next 3 years. A representative from the Life and Inclusion Experiments organisation (L.I.E) was quoted as saying that there would probably be a noticeable decline in the populations of other fish in the river because “the sharks will eat about 20 pounds of fish each per day, more as they get older.”
I wonder if this means they will need to introduce more fish into the Thames? You could always do feeding sessions and make it an added tourist attraction. Scuba diving in the thames? Maybe another money spinner.

Mayor Boris Johnson is said to have protested the experiment, afraid of the hazard it would pose to tourists and riverboat cleaners, but his complaints had been ignored by the the coalition government, with Cameron claiming he is under pressure from the American government to use the Thames for such research. Randy Bumgardner, aide to president Obama said that America could follow suit with the Hudson.

Happy April fools day by the way. It may not have suckered you all in, if it did then hooray for silliness.

3) In 1965 BBC TV featured an interview with a professor who had just invented a device called “smellovision.” This new technology allowed viewers to experience aromas produced in the television studio. The professor offered a demonstration by cutting some onions and brewing coffee. A number of viewers called in to confirm that they distinctly experienced these scents as if they were there in the studio with him. That’s the power of suggestion I suppose. 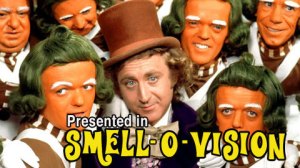 2) 2000: A news release sent to the media stated that the 15th annual New York City April Fool’s Day Parade was scheduled to begin on 59th Street and would proceed down to Fifth Avenue. According to the release, floats in the parade would include a “Beat ’em, Bust ’em, Book ’em” float created by the New York, Los Angeles, and Seattle police departments. This float would portray “themes of brutality, corruption and incompetence.” The “Atlanta Braves Baseball Tribute to Racism” float would feature John Rocker who would be “spewing racial epithets at the crowd.” CNN and the Fox sent television news crews to cover the parade. They arrived at 59th Street only to discover that there was no sign of a parade, at which point the reporters realised they had been hoaxed.

1) On 1 April 1957, the respected BBC news show Panorama announced that thanks to a very mild winter and the virtual elimination of the dreaded spaghetti weevil, Swiss farmers were enjoying a bumper spaghetti crop. It accompanied this announcement with footage of Swiss peasants pulling strands of spaghetti down from trees. Huge numbers of viewers were taken in. Many called the BBC wanting to know how they could grow their own spaghetti tree.

Have a happy April fools day. 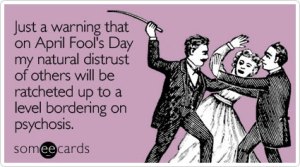 These stories were gathered from the Guardian, Independent and Times websites with special mention to the museum of hoaxes.