Why are ginger blokes funny? 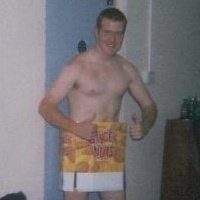 It seems to me that all the ginger men I know are funny. Not funny looking or funny weird, but funny ha ha. It was a blog I was reading the other day (the ginger fight back, give it a go) that got the cogs in my head turning. Are ginger men born funny? Or does it develop over time? Is it nature or nurture? What I mean is, does the fact that they get mocked because of their hair (I’m not condoning it, just stating facts of the schoolyard) mean they develop a self defence funny bone? A self deprecation that led one of my friends to walk around wearing nothing but a box which said ‘ginger nuts’ over his own (they are a type of biscuit for those that don’t know). I shall attempt to use some other genetic examples to quantify my theory.

1) Are all fat pepole cheerful? I once heard someone tell a large lady near me “if you’re gonna be fat, you could at least have the common decency to be jolly”. Let me set something straight from the off, this is not an attack on anyone, but if you are big boned or fat, you generally have a rosy completion and a cheeky, chubby face. This, to my eyes, gives you a cheerful quality. I think we could call it the Santa effect. And to be fair, most large people I know are very happy and laugh often. They are also great at hugs, but I digress. I also know some real miseries who are portly, so this does nothing to help prove my theory. Next. 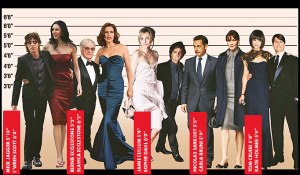 2) Are all short men angry? I’m not, but then I’m just below average height. And once again, let me state that this is not an attack on dwarfs (even though one was called grumpy) or little people. Many famous leaders where short blokes:

All under 5’6, all wanting power, all angry about being short. Napoleon even had a complex named after him (in the psychological sense, not the building sense). I think then that this is nature. And why do short blokes date tall women? Anyway, next.

3) Are all pretty people arrogant? Yes we are. Only kidding. I think that this is more a nurture thing. I know some very attractive/pretty/sexy people (I also know some proper ugly ones, just to show I’m balanced), and it seems that some are very lovely and others are so full of themselves that they become repulsive, despite their looks. This viewpoint is not one of jealousy as my wife is attractive/pretty/sexy, so I’m not jaded by being turned down by the gorgeous folk, I married one. This to me is about upbringing. My wife is down to earth and doesn’t know how pretty she is, those who have been told their whole lives ‘you’re so gorgeous, you should be a model’ feel entitled. It reminds me of a song by the streets, Fit But You Know It. As an aside, I went to school with this guy below (yes, me and David Gandy are the same age, and have surprisingly similar dress sense). He never got the girls then so I hope his late blooming has kept him grounded.

So then, what have we learnt here today? Not much really. I think that the ginger blokes I know are funny because they learnt, at an early age, to laugh at themselves. My hair is all but gone and I can now laugh at bald jokes, I think it’s given me an avenue of comedic thinking I had never really gone done before. So in that respect, gingers are ahead of the curve.

Keep on being who you are my ginger friends, I may not be one of you, but pretty soon I’ll have so little hair it won’t matter anyway.

As always, feel free to share the link, re blog or point people to my new (fancy pants) website address http://www.andrewauthor.com